A preview of coming attractions…

I’ve been doing a little genealogical research in my copious (ha!) free time just to stay sane and have pieced together a few interesting tidbits, which I will share more fully as soon as I can put it together. Don’t expect any major revelations — this isn’t cable TV after all — but what I’ve found does shed a kind of light on those who preceded us.

The story begins on September 21st 1857 when my great, great grandmother appeared personally at the registrars office in London to apply for a marriage license… a most unusual step for a woman (note the crossed our masculine pronoun). 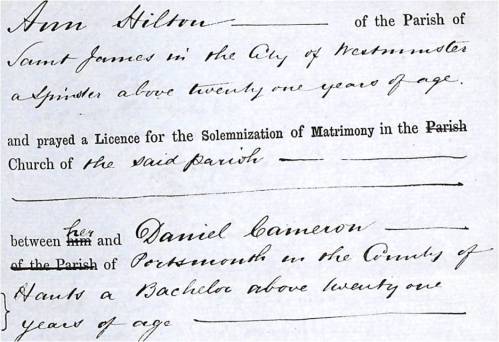 But then she was attempting to marry a soldier of the 10th Lincolnshire regiment,which was stationed in Hampshire and soon to embark for South Africa. To top it off, my great grandfather was due to arrive on the scene at the beginning of November so the circumstances required great initiative on her part. She must have been an intrepid (or desperate) lass.

Now don’t you want to find out what happens next?