I love you, baby, can I have some more

I think I’ve mentioned that I listen to CDs in my car. I know. Quelle old-fashioned. I don’t have an iPod. I haven’t downloaded much music to my laptop. Sorry. This old dog can only learn so many new tricks at a time.

So I have been wearing out The Lumineers and need something new. Or something old. I rifled through my box of “burns”–i.e. burned CDs, which my children have made for me over the years.

Daughters #1 and #2 obliged me many, many times, burning mixes of my favorites as well as mixes with songs “I might like”.

The boy made some “themed” classics, especially the famous “Kleenex” mixes which included songs and music guaranteed to make his mother weep. These ranged from selections by Patrick Park to Boyz II Men and lots of other stuff in between. 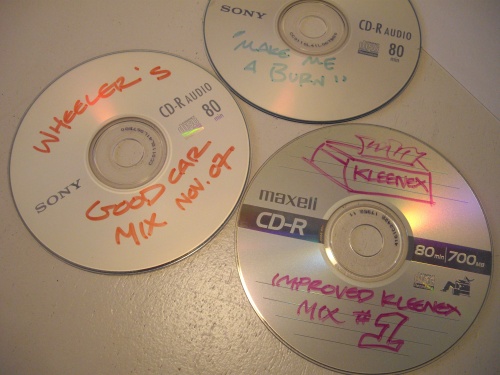 I know that mixes take a lot of effort. But let it never be said that I do not appreciate that effort. I do. Deeply. Thanks, guys. Now, how about burning me a new mix?

4 Comments to “I love you, baby, can I have some more”