I went to see The Yeoman of the Guard by Gilbert & Sullivan on Friday night.

The scene of this opera is laid within the precincts of the Tower of London, in the period of the 16th Century.

Admittedly, it was not the D’Oly Carte Opera Company, but I thought our local Winter Opera company was really quite wonderful.

My mother was a fan of Yeoman and we had the record. 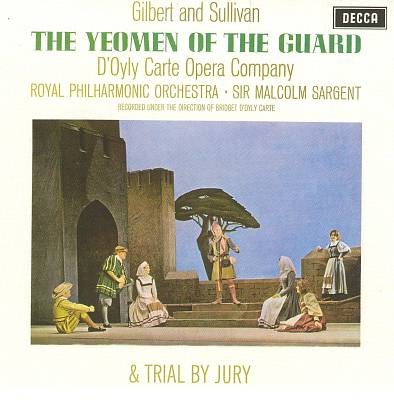 I think she liked it because it is the only W&S opera with kind of a sad ending. She could always relate to the fool/jester character in anything and there is a stellar one in Yeoman.

Anyway, I dragged the OM and the boy along (daughter #3 was otherwise engaged) and they enjoyed it also. We were all proud of ourselves for getting out and participating in a cultural activity.

It reminded me of the time back in 1964 when my mother bought tickets to see the actual D’Oyly Carte Company perform The Mikado. She took my brother and me. I was in the second grade, but she thought I was old enough to enjoy/appreciate this opportunity. (She may have over-estimated me.) Anyway, my father took my little sister (who was not old enough to enjoy/appreciate light opera) to see It’s a Mad, Mad, Mad, Mad World. Ironically this film was on TCM last week and I DVR’d it and then watched it this weekend. It features literally every American comedian (plus Terry-Thomas) alive in 1963. It is overly long and drags some, but it does have its moments. Jonathan Winters is great and the scene in the gas station with Arnold Stang and Marvin Kaplan is priceless. There is a lot of yelling in this movie.

Speaking of movies, I also watched From Hell (2001) on Halloween and, despite the presence of Johnny Depp, I thought it was dreadful. Apologies for recommending it on Friday!

Sunday, as you know, was All Saints Day and we had an interminably long service complete with a children’s sermon dissecting the hymn The Saints of God. Oh, did I mention it was also pledge Sunday? Well, it was. On top of this, the woman sitting behind me was a beat behind or a beat ahead during every prayer and every hymn to the point where I was ready to slap her and slap her hard. I hate feeling that way in church.

And now it is November and the long slide to Christmas begins. Deo gratias.

Elsie. Sing me your song, O!

Point. It is sung to the moon

By a love-lorn loon,

Who fled from the mocking throng,O!

It’s the song of a merryman, moping mum,

Whose soul was sad, and whose glance was glum,

Who sipped no sup, and who craved no crumb.

As he sighed for the love of a ladye.

He sipped no sup, and he craved no crumb,

As he sighed for the love of a ladye.

–Yeoman of the Guard