Grace to you and peace

Did you have a nice weekend? The weather here in flyover country was blustery and cool, but the sun shone and it was good to be out and about.

On Saturday the OM and I drove to Washington, MO on the Missouri River to have a yummy lunch at the Blue Duck which is just down the street from this landmark:

We went to a few antique stores/mall on the way home. I found something for daughter #2’s birthday which is around the corner. All in all, a nice day-trip to another part of our scenic state.

On Sunday I had to go to church early for another confirmation  mentor class with my 8th grade mentee.

Here are some of them down at the Cathedral for an overnight “Lock-in”–remember those?

Besides other stuff, it was the Sunday when they declared their intentions to be confirmed. Thankfully, mine filled out her little card. I would have felt like such a failure if she had decided not to conform and/or be confirmed! (The year-long course is called “confirm, not conform”–catchy, right?) Well, way to go, Brigid!

The boy and daughter #3 came over to dinner and he told us all about his new job, which he started last week. Daughter #1 is also starting a new job in a week, so we are all in a tizzy of anticipation over new beginnings.

In the middle of all this, the OM and I watched The Martian (2015) with Matt Damon, which was okay, but I have to admit I lost interest halfway through. It all seemed mighty far-fetched, not to mention overly long.

We also started watching a British TV show called The Detectorists, which I just love.

It stars Mackenzie Crook (who also wrote and directed it) and Toby Jones and a cast of wonderful English actors. IMDB describes it as a show about “the lives of two eccentric metal detectorists, who spend their days plodding along ploughed tracks and open fields, hoping to disturb the tedium by unearthing the fortune of a lifetime.”  But this is erroneous. They are not looking for treasure. They are interested in making an important historical find. The difference is important. And they do not hate their lives. They have a hobby about which they are passionate. And as for plodding along ploughed tracks, the scenery is beautiful! 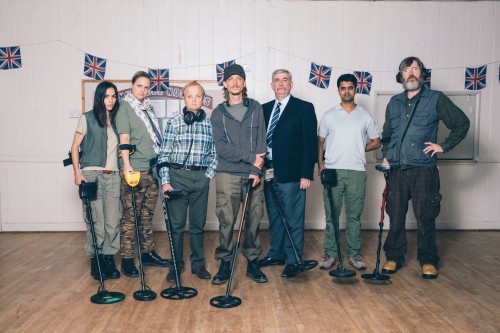 Anyway, I highly recommend you watch it (on Netflix). It is very funny and also sweet. And I think the message is that the real treasure in our lives are our family and friends.

Sadly, there are only six episodes and season two is not on Netflix! Ugh.

Well, have a good week!