“He has a very high and noble nature, and better worth immortality than most of us”*

Happy birthday, Herman Melville! Today (and this weekend), we celebrate the bicentennial of Melville’s birth on August 1, 1819. Readers of the blog know that Melville is one of our most beloved authors, and Moby-Dick? It’ll change your life.

Melville was born and died in New York City, and in his 72 years he traveled the world–from Nantucket to Cape Horn, Tahiti to Lima, Honolulu to the Holy Land. Wikipedia divides his life into categories that include “Years at sea,” “Successful writer” and “Unsuccessful writer.” It’s true that Melville’s professional life was not marked by incredible success, at least not in any sustained way.

Thankfully, in the past century and a half, American authors and readers (and filmmakers and songwriters) have come to understand and appreciate the great genius of Melville’s works, particularly, of course, Moby-Dick. Nathaniel Philbrick describes in Why Read Moby-Dick? the novel’s influence on William Faulkner, Ernest Hemingway, John Steinbeck, and others. And when Bob Dylan won the Nobel Prize for Literature in 2016, he spoke of three major works of literature that influenced him, among them Moby-Dick.

So what does it all mean? Myself and a lot of other songwriters have been influenced by these very same themes. And they can mean a lot of different things. If a song moves you, that’s all that’s important. I don’t have to know what a song means. I’ve written all kinds of things into my songs. And I’m not going to worry about it – what it all means. When Melville put all his old testament, biblical references, scientific theories, Protestant doctrines, and all that knowledge of the sea and sailing ships and whales into one story, I don’t think he would have worried about it either – what it all means.

I think that’s true. Or perhaps another way to put it: it doesn’t mean just one thing. The great thing about Melville is that one can spend years and years trying to figure out “what it all means” (sometimes you can at least manage to get a PhD along the way) and still have more to learn. His novels and stories just never stop giving.

ERE now it has been related how Ahab was wont to pace his quarter-deck, taking regular turns at either limit, the binnacle and mainmast; but in the multiplicity of other things requiring narration it has not been added how that sometimes in these walks, when most plunged in his mood, he was wont to pause in turn at each spot, and stand there strangely eyeing the particular object before him. When he halted before the binnacle, with his glance fastened on the pointed needle in the compass, that glance shot like a javelin with the pointed intensity of his purpose; and when resuming his walk he again paused before the mainmast, then, as the same riveted glance fastened upon the riveted gold coin there, he still wore the same aspect of nailed firmness, only dashed with a certain wild longing, if not hopefulness.

But one morning, turning to pass the doubloon, he seemed to be newly attracted by the strange figures and inscriptions stamped on it, as though now for the first time beginning to interpret for himself in some monomaniac way whatever significance might lurk in them. And some certain significance lurks in all things, else all things are little worth, and the round world itself but an empty cipher, except to sell by the cartload, as they do hills about Boston, to fill up some morass in the Milky Way.

From Moby-Dick, “The Doubloon”

Now, some celebrations of Melville can be a bit hokey: think giant inflated whales. But it sounds like other bicentennial activities center on reading, including Moby-Dick marathons. In our neck of the woods, we’ll celebrate Melville’s life from Nantucket to Tahiti, with nautical decor and tiki punch. Armed with our favorite quotes, we plan to do a bit of reading ourselves. Are you ready? 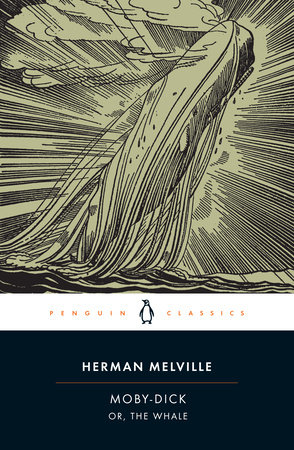 If you haven’t read any Melville this year–or ever!–you could start small, with a novella or short story. Try Bartleby the Scrivener or “The Piazza.” Maybe you’ve read Moby-Dick and you’re ready for another daunting novel. Try Pierre! It features another diverse cast of characters and quite the wacky plot, but it supplies ample rewards in digestible bits of wisdom. Perhaps a pilgrimage would inspire you: Clarel is inspired by Melville’s own trip to the Holy Land. And if the seafaring tales are your thing, I’m partial to Melville’s last work, Billy Budd, which combines the ocean setting of the early novels with the moral significance of the later works.

If all else fails, perhaps give one chapter of Moby-Dick a listen: might I suggest Benedict Cumberbatch reading “Brit,” one of my all-time favorites?